Here is our essential 20 point newcomer guide for the major reasons for playing here.

Point 1: Ideal for playing multiple games at the same time!

To make sure you do not have to wait long between moves, you have several games on the go at the same time typically. An easy way to do this is to enter a tournament. Newcomers to the site are invited to a tournament 1-2 days after registration. In chessworld.net you can enter loads of tournaments and loads of teams, which lots of addicted full members do. Some members are playing literally hundreds of games at the same time. This guarantees that there always challenging positions to find the best move in when they login every day! (or every moment of the day!)

You can play at work (lunchtimes recommended!), even if you are behind a firewall, without the need of installing any software. You can also safely play in a cybercafé, with any system, without any privilege needed (no java, no certificate, no software, nothing!). It is really the best place to play, if you work all day on computer and like to have some breaks during work.

Your opponents are not restricted to be in roughly the same time-zone as you (as they are in blitz chess)- You could play people on the other side of the planet very very easily for example. They get emailed when you move and vice-versa. You play your move several hours later. Basically therefore you can choose to invite someone from the entire member database for a game.

Choose a player that is interested in your interests or a member that is in a holiday location that you want to brush up your language skills on!

You are not restricted to invite people for a game that are currently logged in. (By the way this could be the secret reason the real time servers dont often show national flags - because they would just be flags in your time zone).

You can use this form of chess to help relationships with your friends and family, because it is very easy to invite and maintain a game with them - they do not have to be online at the same time as you! - they can play their move(s) once a month against you!

In a nutshell, there is none of the restrictive pressures for opponents that almost completely removes the possibility of really interesting opponents!

You have time to think and try out and research your moves. Referring to books, playing and testing variations on a board (or using the ChessWorld.net analysis board if you are a full member) is positively encouraged. The idea is to play the best possible moves, and leverage the fact that you have time to do research.

Your moves are of a much higher quality than fast chess games, because you have time to think. This means that when you win, you can generally be much prouder of that win that a blitz game. The opponent generally had time to find good defence, but you still beat him! It also means you will be learning from your games.

You may pick up lots of opening theory or gain a much greater understanding of positions resulting from the opening. This may in turn also enhance your over the board play and blitz chess :-)

Point 5: Time to stroll around looking at other peoples games!

You could be in a team game for example. In blitz chess there is not too much time to look around at the other boards. You are purely focused on your own board. On ChessWorld.net you can see easily how other people are getting along, by strolling around the tournament games, or team games. The games are not going to be over in a flash- there is time to appreciate what is going on in the other games which maybe related to your game in some way!

Point 6: Time to socialise with the opponent between moves!

Often correspondence chess games which are much higher quality than OTB games contribute to Opening theory. New lines are created, and then these ripple down to the faster more blundersome forms of chess! Not only new moves though which may be innovative, but entirely new ideas may be created! You have plenty of time to research your openings, and it is positively encouraged in this form of chess.

People are around for weeks, months and years!... People on the ChessWorld.net server wont be here today gone tommorow, simply because their games will take a while to play. You can get to know them more, through the various activities and goodies at ChessWorld.net such as forums, puzzles, tips, etc.

Point 9: Can fit into a busy schedule!

As long as you stay within acceptable time limits you can think about your move at any time of day or night wherever you may be.

Point 10: Complements other forms of chess!

Alekhine (World Champion from 1927-1935 and 1937-1946) began his career playing correspondence chess and believed that postal and OTB complemented one another. He was also influential in the founding of the International Correspondence Chess Federation.

Point 11: You can play from the comfort of your own home!

Apart from the obvious advantages for elderly or disabled players, taking up web-based email chess can mean enjoying the comforts of your own home instead of making a possibly difficult and arduous journey in bad weather to some noisy, depressing venue for just one chess game with just one opponent! You can play from any remote place- including the north pole! You can even play naked if you want! Wherever you live, appropriate opponents are always available. Even in the middle of a big city it may be hard to find a chess club or other chess events that interest you. For regular over the board players, Web-based Email chess can set new goals and give the opportunity of playing a much greater variety of opposition. On ChessWorld.net, a true international flavour can be immediately tasted through national flags!

You are not subject to various forms of distraction and "playing the man" typical of over the board play. Kasparov has been known for example to really scare to death fellow grandmasters through his intensity and presence at the board!. Gamesmanship or intimidation have far less opportunities in web-based email chess. You may put up some annoying smilicon characters for the opponent to read, but generally these people can be reported to the webmaster! Playing the board position and socialising is normally the top priority in web-based Email chess!

Point 13: Can be much more relaxing than blitz or over the board chess

Unlike blitz chess servers, where you often feel drained after even an hour, here you can casually stroll in, and play considered moves, and leave notes for the opponent, etc. It is far more relaxed, and does not leave you drained playing here. On top of this, your moves will generally be of a much higher quality than in throw-away blitz chess. You can play at your own pace- there are a variety of relatively casual time limits to choose from - ranging up to 20 days per move even! There is no frantic time scrambles which are often associated with blitz chess and over the board chess.

Point 14: Perfect for all-play all tournament format with a group of friends

Because there is time between moves, it makes it perfect for having games in parallel. And what better way of having games in parallel, than with a group of friends. At Chessworld, you can create your own tournaments, and invite selected friends to them. You can also play in Team tournaments with various various themes. So for example, you could be in the Football league, representing your favourite football team. Or you could be repesenting your Country playing against another country.

Point 15: Perfect for "Rest of World" matches against Famous Grandmasters and International masters 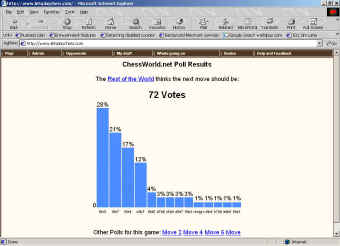 You can discuss tactics and strategy against the expert, and really boost your game, as well as having great fun. We have had many great players play such matches including IM Silman, GM Patrick Wolff, GM Plaskett, IM Basman, etc. The highest voted move after 5 days is played automatically by the server.

Thank you for taking the time to read about the points of the site.

You have time to apply strategic themes from Instructive master games. For example, members are regularly shown great instructive game videos such as: Instructive game: Rook on the 7th (see video above).

In correspondence style chess, sloppy weakening moves are more likely to be punished by opponents. The patterns and understanding you pick up are more likely to be successfully applied to Over-the-board serious games. Whilst blitz chess on the other hand can encourage sloppy play and bad habits. Things that might work in blitz are often much less likely to work in normal time controls.

Point 18: Opponents and players are generally more relaxed and maturer on a correspondence site than blitz sites

In correspondence style chess, because patience is a virtue, you are far more likely to come across polite intelligent and well mannered players and opponents, than on blitz sites, which are more adrenalin-driven.

Point 19: Games are more worth annotating and adding to collections

On Chessworld, you increase the likelihood of playing great and even brilliant games. You have the facilities here to then annotate those games and/or add them to your own collections to share with others.

Point 20: Correspondence chess spreads the word of chess more easily than any other form of the game!

Because you can play many games simultaneously, you can easily invite friends to join in the fun - and be able to play them along with your other games. You are not just locked into one-to-one games.

You must be convinced by now, so start playing!